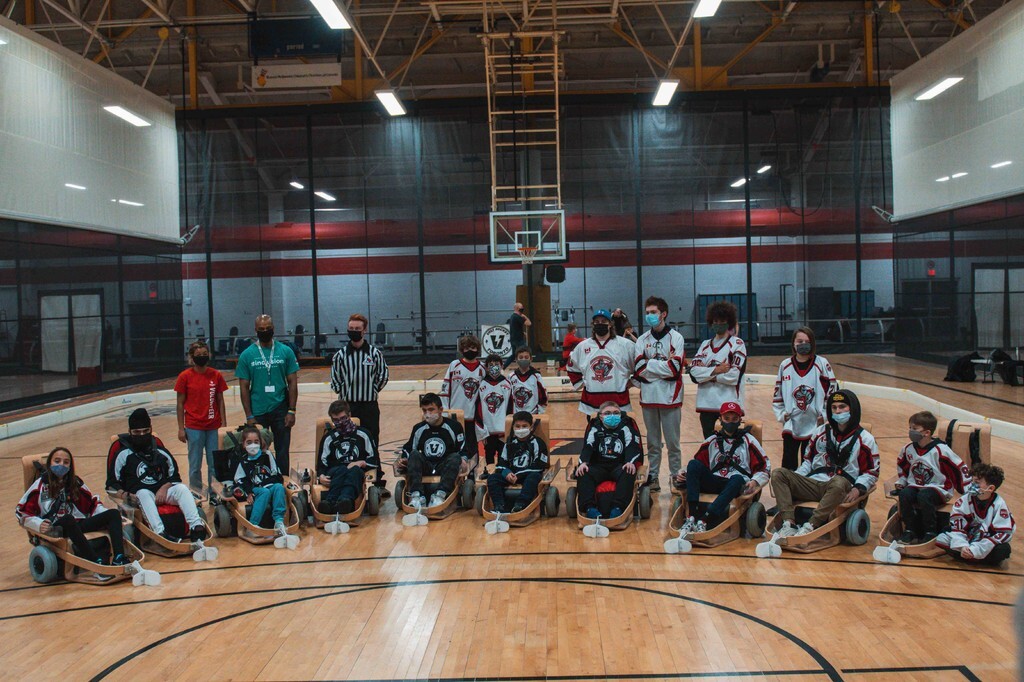 After Volt Hockey launched in 2019, it has quickly become a staple of the programming offered by Variety – The Children’s Charity at our flagship location Variety Village and throughout Canada.

Hockey is Canadas most loved game; with sledge hockey growing in popularity across the globe, there is still a gap in the sport for individuals with disabilities.

- Volt hockey has been such a success throughout Ontario because it gives children with disabilities the opportunity to make friends and improve necessary developmental and social skills, Says Audrey Bouman, Manager, Sport Marketing & Development, Variety – the Children’s Charity of Ontario.

When Volt hockey was introduced, children and youth at the Village saw this opportunity to play a game they have not been able to in the past. Volt hockey provides the chance for siblings to bond over playing a game.

The establishment and growth of Volt hockey possible has relied heavily on the participation and support from sponsors, coaches, and volunteers within the community. Variety – The Children’s Charity of Ontario is a provincial non-for-profit that works to raise funds to support programming for children with disabilities. Variety Village, the flagship facility, is where Volt hockey first launched in Canada. Variety – the Children’s Charity raises funds to purchase Volt chairs, and they then supply those chairs to locations across Canada. That allows each Volt hockey location to operate in its independent way. Every Volt team relies on their head coach, a small number of staff and a group of volunteers to make the program run smoothly.

- The smiles on their faces were infectious, and it was so clear that the goal we had with Volt hockey was working. To provide these children with the opportunity to develop friendships and create memories they will cherish forever, says Bouman.

Variety - The Children’s Charity of Ontario has been operating in the province for over 70-years. We have cared for kids throughout those years, shaped leaders for tomorrow, and helped generations of people come together to find support, get healthier, and make friends for life. Variety programming empowers children with disabilities to be seen, participate, and feel included. The goal is to establish additional locations throughout Ontario and beyond. We will provide our Variety of programming to those in need. Through local partnerships, they work to reach through accessibility train and education.

- Our Volt players are very eager to be presented with the opportunity to participate in Sweden at the World Cup Volt Hockey. Both children and parents are always asking how they can support to ensure these kids will be able to fulfill that dream, says Bouman.

In Ontario has it grown fast. Volt was introduced and launched in partnership with the Royal Danish Consulate at Variety when the Prince and Princess of Denmark visited the facility. The program was introduced in 2019 and has continued to grow since then.

There are currently an average of 15-20 players enrolled at the Scarborough location. There are approximately 50 -80 players at all locations across Ontario and Alberta. Each location has 6-8 chairs, with the Scarborough location home to the most standing in at 16. Due to demand, there is a significant need for funding to purchase additional chairs at select locations. Along with conversations being held with two new locations launching in late 2022.

The province of Ontario only recently came out of lockdown these past few months. Therefore, in November 2021, we were able to host our first ever Volt hockey tournament. Two Jr. hockey clubs took the time to visit Variety and play against our Scarborough Volt hockey team. So they are enthusiastic if nothing else ...

- Staff, parents, and participants have witnessed the impact playing Volt has had on their lives. We can confidently say that being able to participate in a world tournament is something many thought they would never be able to do. And it would be a dream come true, concludes Bouman.